Everyone got up early on Saturday, so we could meet at the Build Site and leave at 5:30 AM for our 2+ hour drive down the turnpike.  Started out in rainy damp conditions, but by Valley Forge it got dry.  Arrived at the school before 8:00 and unloaded.  Our first time to this competition, we expected a small pit area, but was pleasantly surprised to find a lot of space and the largest pit area of any event.  Being a 1 day event, the qualifying schedule is short, and we only get 5 matches for ranking.  We were excited when the initial qualifying schedule was printed and we were with TechFire 225 for our first match.  That changed when the revised schedule came out, and we were in Match 1 against Nemesis 2590.  Match 1 started about 45 minutes behind schedule, but our well prepared robot and team were on top of their game and after getting the all important Auto Ranking Pt, proceeded to control the match, and climb to win 435-182.  Our 2nd match was Match 10 against TechFire 225.  After getting the Auto RP again, we battled but lost 436-334.  This dropped our rank to 9th out of 31 teams.  Our 3rd match was Match 12, which we won 393-261 and got another Auto RP.  Moved up to 5th in the rankings.  We won our 4th match with 3RP again, and going into our 5th and final qualifier were 2nd behind TechFire 225 in 1st.  We won our final qualifier and got Auto again for 3RP, and jumped into 1st place, which held to the end of Qualifying.  Key to our 1st Place ranking was our rock solid auto that got us 100% of the available Auto Pts., and our ability to play all aspects of the game.
Our #1 Alliance played Quarter Finals flawlessly, winning both matches by large margins 451-214 and 448-224.  Our first Semi match was another easy victory 446-128.  Our #1 Alliance was working great together with 2539 getting 2 cube switch autos, 225 doing scale autos,  11 filling the vault, while 2539 and 225 held dominance on the scale, and the switches and double climbing multiple times with 225 holding the Mayhem cube for extra bonus points.  But not all went smoothly.  During our 2nd Semi match, 225 tipped over early in front of our scale, rendering them useless, but also partially blocking our access to the scale.  We continued to battle with 2539 doing scale and 11 working the switches, but we couldn't overcome and lost 206-411, setting up a tiebreaker.  Everything seemed fine until the match started and 2539 didn't move. Not one little bit.  However, across the field there was some misfortune as well, so it was for the most part 2 vs 2 and TechFire and MORT were able to secure a victory 389-215 and move our Alliance into the Finals.  Scrambling in the pits, with help from the FTA, we thought we had a NavX gyro problem and replaced the NavX and got the robot running again.  Final Match #1 against the #3 Alliance of 219-1923(Host Team)-5420 started out with our auto not doing what it was supposed to do.  From there it looked like the drive team had their hands full as they battled an ill handling robot, but did manage to score several cubes and help in the 410-218 victory.  Being a quick turn around, there was not much time to fix anything. Final Match #2 was similar with handling issues, and we still helped in a reduced capacity, but our Alliance was able to come out victorious for our first ever Championship Trophy.  The trip home sure seemed a lot shorter as we were all smiling from a very successful MidKnight Mayhem experience.
​ 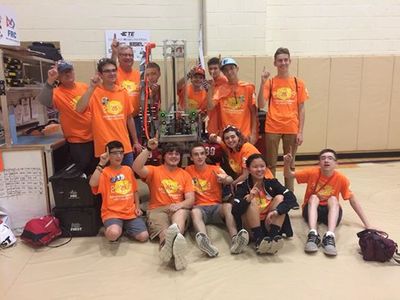 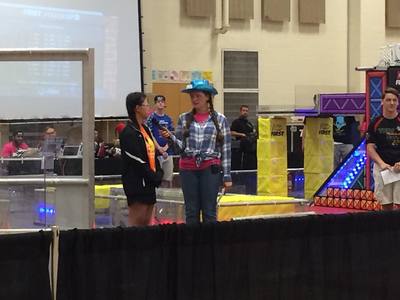 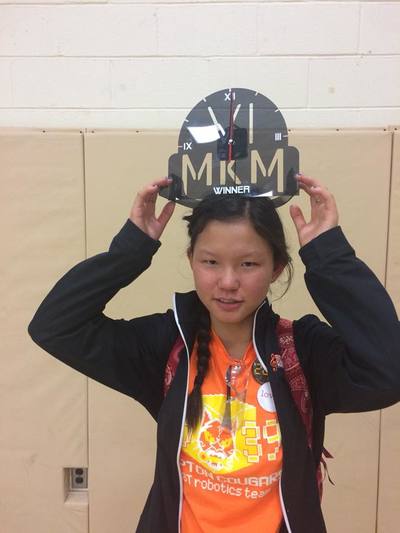